Seastar is a distinguished sorrel quarter horse. His date of birth is unknown, but he is pushing 30. Today, he is the most senior horse in the herd.  Although he was not the first to be rescued, Seastar’s story embodies the sanctuary’s mission of aiding abused, neglected, and forgotten horses, when care is critical.
Seastar’s first ten years were hard. He was seized by the Monterey SPCA in 2008 after his abusive owners were convicted of homicide. He was found abandoned in a round pen with a pig and another horse. He had been tied up for so long that his halter had become embedded in his flesh. Among other abuses, his owners unsuccessfully and illegally tried to geld him without the care of a veterinarian.
Seastar adjusted to his new life at the sanctuary effortlessly. He is good-natured and stoic despite his cruel past. His ability to trust and relax into his place among the herd is a true testament to his strength and healing power. With his past, and his age, he still has painful conditions, but he is essentially a happy horse. He has a grounded presence, emotional depth, and brings a sense of earthen peace to those who spend time with him.
He was properly gelded late in life after removal from his former owners. Because his learned stud behaviors have not been forgotten, he is an eternal ladies’ man. His subtle prurience inspires the mares to run up alongside to squeal, and wave their tails. He can put a mare in season just by looking at her.
Seastar is more in to being than doing, though he applies himself when the task is meaningful. He is the sanctuary’s ambassador for introducing young children to horses. Calm and gentle, he can always be trusted. He makes them so comfortable that more than one has stretched out to take a nap on his back. Seastar gives them the unforgettable thrill of making that first connection with a horse. They give him the pure joy of unconditional love that flows easily from little ones.
Seastar belongs to the gelding band with Takoda and Bentley, with whom he enjoys pastures with ocean views. He’s the most laid-back of the three boys and not prone to the playful mischief of his younger pasture buddies. He often stands separate from the goings-on around him, absorbed in reflection, or maybe just dozing. Seastar richly deserves to spend his days in peaceful contemplation, giving joy, inspiring and receiving love, and radiating a quiet wisdom to those fortunate enough to listen.
sponsor seastar 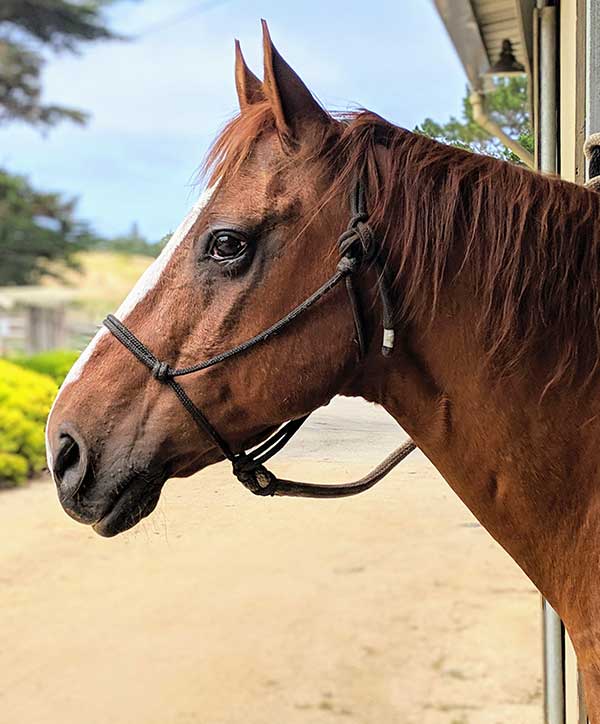