Peanut is a grulla quarter horse mare born on June 12, 2007. She and two siblings were discarded by their breeder during economic downturn. When the sanctuary learned they were bound for auction and slaughter, we mobilized quickly to rescue all of them. Her exhaustion, vulnerability, and sadness when she arrived at her forever home spoke of the betrayal she had suffered in the hands of humans.

The familial bonds that take root in horses are deeper than many people realize. The reunion of her family in a protected and peaceful environment was extremely important for Peanut. The herd is a comfort zone she depends on. If moved out of sight for too long, she gets anxious and calls out to them. Like her rescued siblings, she knows that life can take sudden and cruel turns. In unfamiliar situations, she demonstrates that she’s braced for it.

Peanut is almost identical in appearance to her sister, Bravestar. She is tan-gray with a dorsal stripe down her back and stripes on her dark lower legs – defining features of dun coloring. The hair of her tail and mane is a mix of black and tan.

In temperament, the two sisters are quite different. Bravestar is the calm lead mare of the herd, full of the gravitas of her position. Peanut has a more lighthearted disposition that allows her to enjoy bouts of goofiness. Bravestar runs at the head of the herd, while Peanut runs at her side, but just slightly behind her. If food is involved, however, she’s been known to push ahead to the front. In 2019, Bravestar spent five months in physical rehabilitation for an injury. During her absence, Peanut rose from the middle ranks to play more of a leadership role. Her inner lead mare only needs confidence to soar.

There is a touching photo of our founder, Sharon, with her arms around Peanut when she was first rescued. Sharon is pouring her love into this shell of a horse, a closed down shadow of what she would become when safe and cared for. Now we enjoy photos of people hugging and kissing Peanut as she pours her love into them. She has a gift for taking stress and anxiety away, lowering blood pressure and pulse rate. She is a healing, soothing presence in her own right. Healing at the sanctuary is a two-way street. 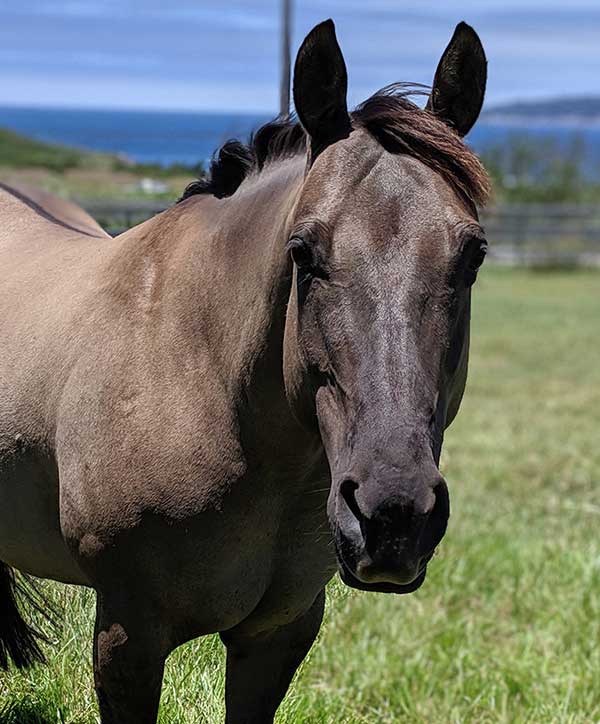