Bentley the pony is a punk with huge heart that knows when to be gentle! He’s sweet and obstinate, naughty and loving, a clown and empath. Bentley was rescued in 2017 from a kill auction in Texas. Best guess, he was born in 2014. The auction said he was a five-year-old gelding, but he hadn’t been gelded and was still losing baby teeth. We will never be able to wrap our minds around the fact that this bundle of love and laughter was condemned to slaughter. After he’d been purchased for the sanctuary, he was weak and very sick. Bentley had to be quarantined for months before he could enter California. Once he reached the sanctuary, with patience, love, and care, he regained his strength and stamina. He’s been going full steam ahead ever since.
The frame of this pony is much too small to contain his towering spirit. It spills over in daily eruptions of joy, mischief, and playfulness that are contagious. Everything that’s going on is Bentley’s business. He’ll wiggle through the bigger horses to get the best view. Once his curiosity is satisfied, he’ll scamper off to kick up a game of tag. When horses in the community were evacuated to the sanctuary during wildfires in 2020, Bentley made them feel welcome. It wasn’t long before he had them joining him in fence line sprints.
Bentley joined the gelding band with Seastar and Takoda. The boys have their own section of the barn that opens into shared pastures. He got into it with Seastar  in the beginning, but Takoda handles his energy with the loving patience of an older brother. When they race together, the long-legged horse allows the little pony to take the lead and believe he is the fastest equine in the world. Bentley is a shooting star, a fire cracker, a tonic for the soul, who makes life at the sanctuary rich and entertaining.
SPONSOR BENTLEY 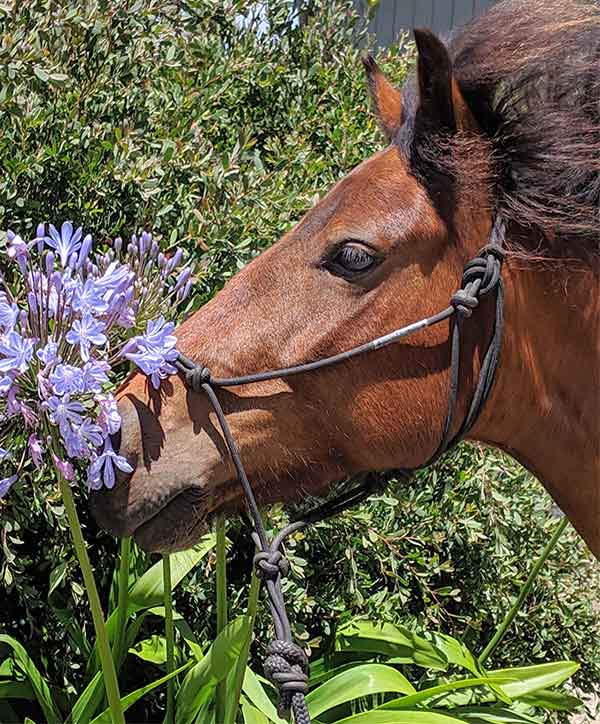